Background & Relevancy of the Sector

Background Of The Fishery Department

The State of Assam is richly endowed with abundant natural resources including aquatic resources. Considering the immense potential for development of fishery sector in these aquatic resources, the then State Government in power had thought it appropriate to at least have a cell in the Government to coordinate the various activities of fisheries in the State, more so in the matter of settlement of fisheries even if it was forthe limited purpose of earningrevenuefortheGovernment.

It was in December 1991, when the Government which was then in power took a hard look at state of development of fishery in the State and realized that the department which has suffered long years of neglect must now be given the importance it deserves for the economic development of the State as a whole and the fish farmers in the rural areas in particular. A decision which could be termed as momentous was accordingly taken for the creation of a separate Department of Fishery. In other words, Fishery Department now no longer functions under the shadow of its erstwhile big brother departments. It is now free to grow on its own from strength to strength and acquire the status it deserves.

The post of the Director of Fisheries was however created in the year 1968 when the cell was attached to the Department of Animal Husbandry and Veterinary.

Relevance Of The Fishery Sector

Assam is endowed with vast fishery resources in the form of ponds, derelict water bodies, beels, reservoirs etc covering about 2.86 lakh ha. In addition, the two major river system viz. the Brahmaputra and the Barak covering about 4820 km along with 53 tributaries have formed the back bone of the state economy.Sustainable development and management of the potential resources for productive purpose can supplement to the food and nutritional security in the state.

Fish occupies an important place in the lives of the people of the State and fish farming has been one of the common activities in the rural areas. More than 90% of the people of the state prefer fish in their meal leading to ever increasing demand for fish. Thus the Fishery Sector is considered as an important economic activity in the socio-economic context in the state of Assam, providing scope for employment generation especially in the rural areas through fish production and its related activities.

Importance Of The Fishery Department

Most of the people engaged in the fishery sector, either in the culture or in the capture fisheries are not very sound economically. Initial investment in setting up of a fish pond or a farmattracts for comparatively largefund. Moreover, due to lack of awareness, knowledge and skill on scientific fish culture practices and management, fish production in the state is comparatively low in relation to its potential. Department of Fisheries can play important role in bridging these gaps and contribute for technical backstopping. Due to constant effort of the state as well as central government and growing interest of the farming community during the last few years, fishery sector in the state has reached to a significant position in the state economy. Recently fish farming has been taken by many rural youth and entrepreneurs as a commercial activity. Fish production in the state has reached a level of 3.07 lakh MT during 2016-17 against 1.58 lakh MT during 2000-01.

For overall growth of the sector, the Department functions with the slogan of ‘’Grow More Fish’’ and the following mandates:

The Department has adopted development planning for the fisheries sector as per the United Nation’s Sustainable Development Goals (SDG) self sufficiency followed by surplus production for export. 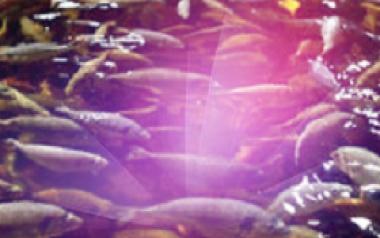